Meeting Street Academy is recognized in the “Exemplary High-Performing Schools” category, placing it among the highest performing schools as measured by state assessments or nationally normed tests. Five South Carolina schools were selected for this year’s honor. Now in its 39th year, the National Blue Ribbon Schools Program has recognized more than 9,000 schools since its inception.

“This year’s cohort of honorees demonstrates what is possible when committed educators and school leaders create vibrant, welcoming, and affirming school cultures where rich teaching and learning can flourish,” said Secretary Cardona. South Carolina Superintendent of Education Molly Spearman echoed the sentiments, expressing, “We are extremely proud of these five South Carolina schools that have been honored nationally for their academic excellence. This award is testament to the hard work of students, teachers, staff, and families in these communities.” 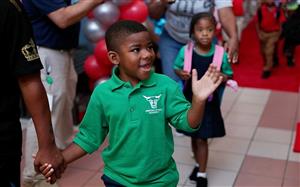 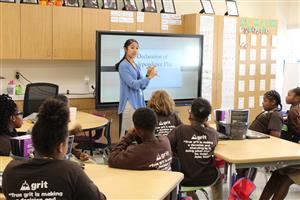 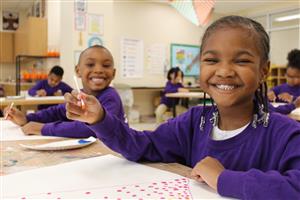 Founded in 2012 and located in downtown Spartanburg, Meeting Street Academy is one of South Carolina's first Public Schools of Innovation – learning from, and drawing upon, best practices from traditional, public charter, and independent schools across America. These schools can request exemptions from certain state laws that apply to public schools, setting their own school calendar, class sizes and proficiency-based learning models. Today, the school serves more than 300 students from Spartanburg’s Highland community in pre-K 3 through 5th grade.

"We are so proud of our students, families, and team members at Meeting Street Academy - Spartanburg today.  The Mavericks have earned this recognition," said Christopher N. Ruszkowski, CEO of Meeting Street Schools. "This award wouldn't be possible without the partnership and commitment of the Spartanburg District 7 board and leadership over the past decade.  As one of South Carolina's first Public Schools of Innovation, our team is able to embrace best practices and maintain an entrepreneurial spirit, thus working to establish a proof point for what is possible for every student in South Carolina, regardless of background or zip code."

Beginning with full-day early childhood programming for three- and four-year-olds, the school grounds its approach in character and social-emotional development utilizing eight "paths to success," including curiosity and citizenship.  In the early grades, there are two teachers in every classroom, thus reducing student-teacher ratio.  Across all grades, outstanding academic growth results are rewarded with performance-based bonuses for core content teachers and interventionists.  The school also offers player-coach roles, aspiring leader pipelines, and the most competitive teacher compensation in the region.

School begins early in late July, and with its extended day model and partnership with the Boys & Girls Club, students have 20+ more days of instruction and enrichment.  Throughout every student's experience, they are taught using best-in-class curriculum and regular academic assessments.  MSA-Spartanburg also commits to supporting its students after they graduate – with intensive alumni services for families to ensure that middle and high school experiences build from the strong elementary school foundation.

"Meeting Street Academy is a magical place. We as Mavericks should be so proud about this National Blue Ribbon honor, because we earned it through hard work and through our commitment to Paths To Success traits," said Ms. Tamil Goodson, who has taught 3rd, 4th, and 5th grade at the Academy, is a Meeting Street Mom, and now coaches Maverick teachers to improve their craft.  “I'm so honored to be a part of such a vibrant community of educators, team members and families. We are ‘leveling-up’ to ensure all of our students are successful in school and in life, and it brings me tremendous joy as an educator to be here each and every day."

District 7 is no stranger to public-private partnerships, having partnered with private individuals and entities to create successful ventures like The Franklin School, The Viking Early College, Valkyrie Middle College, and The Cleveland Academy of Leadership.  “Pushing the envelope of innovation through internal and external partnerships is ingrained in District Seven’s culture. We believe in providing the opportunity for every student – and every citizen in our broader community – to achieve their full potential,” said District 7 superintendent Jeff Stevens. “Meeting Street Academy is a shining example of what can be accomplished when we're able to think freely and differently about how we educate our children.”